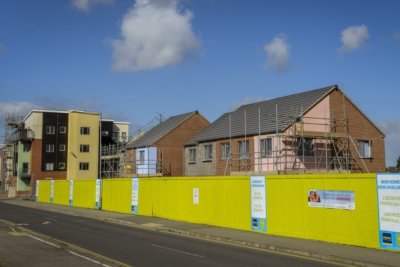 The first phase of the project to build more than 50 homes on the site is nearing completion, and should be finished in May, and members of the council’s regeneration, environment and community panel last night agreed to recommend to cabinet, which will make the final decision when it meets next week, to stick with the project.

The council is being asked to spend an extra £425,000 to build nine affordable homes on the land - seven would be made available for sale, with the other two being offered for rent.

The second phase of the work comprises 58 units, and the council’s lead officer Dale Gagen told the meeting that all but 10 of the 54 homes being built as part of phase one had already been sold.

He said: “If you go back a long time, the land was a brownfield site that had been left derelict for some time. If you look at the homes built in phase one, they are spacious, high-quality homes. Phase two will include a different mix of homes, and interest has already been registered in 30 of the units.”

Alistair Beales, portfolio holder for regeneration, said the “finished result was very pleasing and the homes were selling well. I think it’s a ‘win-win’”.

Panel member Judy Collingham added: “I can think of no better way for the council to spend its money than by raising such once dreadful sites from the dead. We desperately need new homes.”

The council’s chief executive Ray Harding said it was the most difficult regeneration site he had come across, and added: “It’s important that we’ve got something going, and we need to keep that development going. It is creating a new market in South Lynn for housing.”

The members agreed to support Mr Beales’ preferred option to continue with the project and build the affordable units.

The borough council has led the redevelopment of the NORA since its inception in 1998. The project aims to deliver the comprehensive regeneration of an area of around 53 hectares of underused and derelict land extending from Boal street to the A47 adjacent to South Lynn.